When I meet a new city, I’m so willing to fall in love with it. I try to give it a warm hug and ask it to bear its soul immediately. I’m demanding. When perhaps I should hang back a little and let it come out from behind the curtains in its own time.

I went to Beijing wide-eyed and eager to swoon but left feeling a little rebuffed and disorientated.


When my friend Michelle and I arrived, mid-November, mid-afternoon, the sun was an amazing golden ball, hazy but intense. It was cold. There was snow and ice on the ground and tree branches. The air felt crisp and fresh but surely that lovely hazy light was just pollution?


We were staying in a rather lovely hotel but it sat on a ring road – a vast, multi-laned ring road with no pedestrian crossing in sight. We gazed into the middle distance from our windows and wondered how anyone ever managed to get to the other side. There was an observation tower seemingly only meters away but after much deliberation we decided it just wasn’t worth risking our lives for.


We took a short walk outside, laughing at the minus zero temperatures for the first few minutes, and then grimacing and struggling to inhale. We just wandered down the street and in and out of little shops. Certainly we didn’t feel unsafe, but the curiosity and interest from passers-by was not playful. It wasn’t tempered with the innocent joy of the unknown and the shy possibility of connection. It was, instead, a little suspicious and closed. Even though I tried to grin pleasantly at everyone (I admit, that may well have been the problem).


The communication breakdowns we found endearingly funny were just sources of consternation to service staff. At the hotel we ordered something like a Bailey’s on ice, and a vodka and lemonade. The waitress returned with a Black Russian and a Kahlua shot in a martini glass. But no smile.


Michelle and I took the inevitable Great Wall tour. It was only a small group – a very quiet Indian couple, and an American Chinese couple with elderly parents. Our Chinese guide, Eric, was lovely and engaging and helped us believe we could still fall in love. The tour group itself was from one of Dante’s circles of hell. The one were people responded to questions in monosyllables and didn’t bother to ask any in return. The one where people on holiday were depressed and depressing, uncommunicative and closed. These were folks who audibly sighed with joy and relief, and pounced eagerly, when fries were brought to the table at the end of an excellent Chinese lunch. Even, to my dismay, the elderly Chinese Americans.


Michelle and I drank all the alcohol at the table – our glasses, the Indian couples’, the elderly Chinese parents’ – and left to wait outside.


Maybe it was the cold. Beijing was cold. The cold was sometimes unbearable. My fingers hurt, I couldn’t feel my face well enough to speak. I was standing, walking, waving but only because my brain was still functioning and sending the correct messages to my obedient limbs.


Finally we get to the Wall. It is an impressive and beautiful structure. It’s just a wall but it’s built across mountain tops and the idea of hundreds, thousands, of Chinese building this enormous monument by hand, brick by brick, of surviving winters in the dark and freezing watch towers is truly staggering. I struggled up the wall – icy steps and gale force winds. I lost my balance and slid to the ground. I stepped carefully and all the while thought of those who built and guarded it. What resilience, what fortitude. And what misery and despair they must have felt, surely. 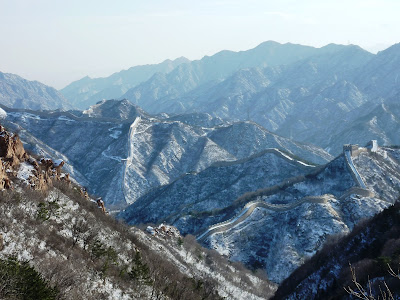 The next day, our last in Beijing, I was restless and cantankerous. Like a selfish traveller I was looking for the familiar. I like to think it was in search of connection, but maybe it was just a comforting blatant search for the familiar. The city seemed soulless, the people hesitant. We had met a few warm people but we were kept at a distance. When I like to be close. Of course, that’s my problem, not any other nation’s.


So we headed for the Forbidden City and the Temple of Heaven. You can find any information you like on both of these astonishing places – go look for it if you like – but not just yet. In a moment. Because one of the most interesting episodes for me was the walk through the park to get to the Temple of Heaven.


Here was life. A sheltered gallery where groups huddled together playing cards, slapping them down, jeering and triumphant or frowning and defeated. There was karaoke – a serious looking sing-off between two men. Another woman putting her whole heart into her song and all the expression into her face.


And then there was an open air ‘disco’. I love music and I love to dance. So I watched transfixed at a group of folks gathered together in an open space in the park. All these people, young and old, dressed in heavy coats, moved in various ways to loud speaker music. It was 3 o’clock in the afternoon. Sunday. Minus 8 degrees. A middle-aged couple danced a tango so gracefully and beautifully you’d think they were competing. They were so earnest and light at the same time (remember, minus 8). Everyone was beaming, content and patient. It wasn’t a wild party; it was a sedate but passionate appreciation of dancing and music.


I smiled. I smiled and smiled. Strange how these few minutes influenced all my perceptions. I knew this, I knew dancing. And I knew community, and togetherness and warmth when I saw it. Even if I didn’t necessarily feel welcome to join in, that was ok. I’d witnessed it. That was enough to connect.


Even if just for a moment, only connect. 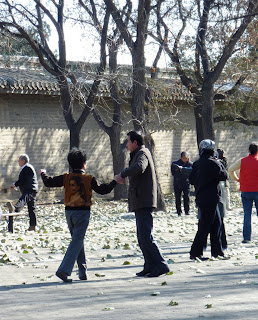